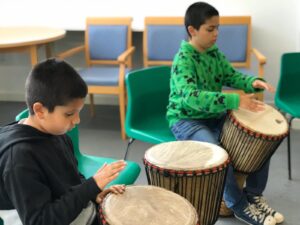 Africa Comes to Butetown was a Ty Cerdd funded project delivered in partnership with Butetown Arts and Cultural Association (BACA). The Successors of the Mandingue were commissioned to deliver 10 music workshops beginning in September and ending in December 2019.  Workshops were held in four different locations, which included outreach sessions to specialist youth provisions.

The programme was delivered as follows: 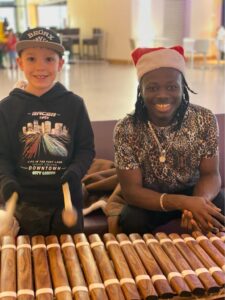 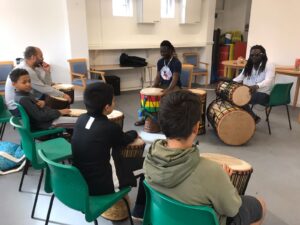 Altogether 111 children and young people participated in percussion workshops over the course of ten workshops and learned about aspects of traditional West African culture taught by two skilled musicians and supported by additional facilitators. A further 47 adults benefitted in their support roles, either as youth workers, centre staff, or parents participating with their children.

By engaging in outreach activities we were able to include children and young people who have not participated in musical activities previously and had not engaged with Butetown Carnival in the past. 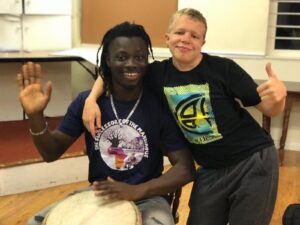 In Cardiff Deaf Centre we were able to make music more accessible to a group normally excluded from a lot of mainstream musical activities due to a lack of communication support.  By having access to a British Sign Language (BSL) interpreter we were able to ensure all the young people had equal access to high quality percussion tuition led by master musician N’famady Kouyaté.

At the IMPACT – LGBTQ provision in Cathays the youth worker commented that it was rare for the young people there to engage with activities, but approximately 75% of attendees ‘had a go’ affected by the tutor’s infectious enthusiasm and passion for their art.

The session for the Inclusive Youth Project was paced to meet the needs of the participants, so that all were able to access the learning with confidence, they were pleased to have a fresh activity to engage with, many asking where they could access further sessions.

A parent and grandparent at The Millennium Centre were reduced to tears after their little boy sat and drummed for the entire session – they told us that he normally will not sit down, has a limited attention span, and has been diagnosed with ADHD.  They were overjoyed that they had ‘found’ something that he engaged with and were keen to buy him a drum and to source future workshops and lessons. 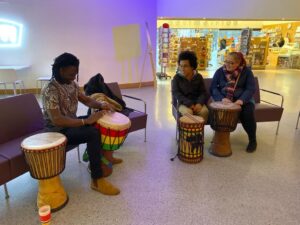 Finally, the session at the Wales Millennium Centre was designed to bring the activity and Butetown Carnival to a totally new audience – being open access, and open to all.  As a result we had the most diverse group of particpants to date, including a blind young person (who was given an impromtu touch tour of the instruments by one of the facilitators from The Successors of the Mandingue), grandparents with grandchildren, parents with toddlers, teenagers, and young people with additional needs out with their support workers and foster carers.  Several participants signed up to our Facebook page to keep in touch about future events. 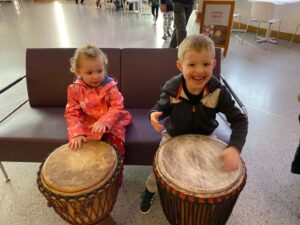 Successors were extremely fortunate to work with brilliant partners in this project –  The BEAT Centre, Cathays Community Centre, The Wales Millennium Centre, Cardiff Deaf Cool Youth Club, and of course Ty Cerdd as funders – all ensuring that this project was successful.  Accessibility and inclusion were at the heart of this project, and we were able to demonstrate that this is possible through partnership working and a creative and flexible approach to delivery. 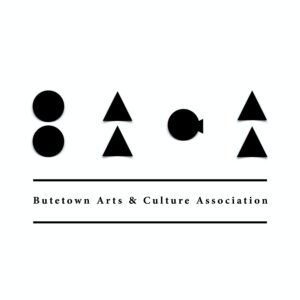