The Griot (Djeli) and the Balafon

Sharing culture through the generations 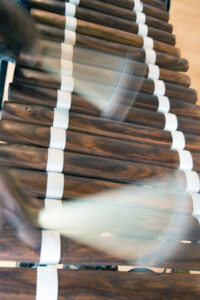 The balafon is sacred in Guinean culture and is traditionally played during ceremonial celebrations, carnivals, and community festivals. Legend tells that the first balafon was discovered by the King of Soso, Soumaoro Kanté, in the 13th Century and it was given into the guardianship of the djeli Balla Fassèké Kouyaté. The Kouyatés have therefore been a significant family of djeli (or griot) for generations. N’famady Kouyaté, our Artistic Director, is a direct descendant, and one of the stars of the succession of the Mandingue.

In the winter of 2021/22 N’famady  travelled to his homeland of Guinea on an R&D trip supported by Wales Arts International’s International Opportunities Fund (IOF) to research the tradition of his instrument and its story, which is so central to the Mandingue folkloric canon.  In partnership with Conakry based theatre company Uni Arts et Culture, and its director Lamine Diabaté, N’famady explored creating a collaborative piece incorporating storytelling, music, and dance, with an initial sharing in the gardens at the Onomo Hotel in Conakry (clips of which are included in the film below).  The short film produced by the project gives a snapshot of a trip that documented balafon making, interviews with elders, and balafon playing in different settings. Read on to discover the enchanting story of Balla Fassèké Kouyaté as told by the djeli for centuries.

(The griot or djeli are guardians throughout the generations that are responsible for preserving and sharing ancient traditional histories, songs, and rhythms)

Balla Fassèké was the first griot to be called Kouyaté because of the balafon.

But how and why? Here is the story… 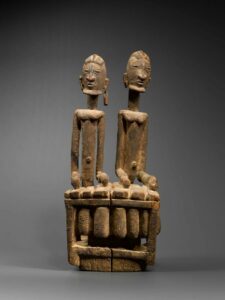 The legend tells that it was Soumaoro Kante (the sorcerer king of the Soso empire) who one day met jinn (or spirits) that showed him an instrument he had never seen before – the balafon. He was so proud to have it he wanted to remain master of this fantastic instrument. No one else had the right to touch it. If someone were to play it, he was immediately executed.

“Even if a fly landed on it, he would find and kill it”,  – it was said, as if to give more force to this prohibition.

But one day, while Soumaoro Kante was out hunting, our ancestor Balla Fassèké took advantage of his absence to enter his secret hut where the balafon was guarded by an eagle.  The eagle placed the balafon sticks in Balla Fassèké’s hands and he began to play. Though out in the bush, Soumaoro hears the sound of the balafon and immediately went home furious with rage. And he was about to kill Balla Fassèké the griot, but fortunately, all that God does is good. So, the closer Soumaoro Kante got, the more he was amazed by Balla Fassèké’s way of playing balafon and this is what saved the griot.  Balla Fassèké impressed Somaoro by singing his praises, and by his way of playing balafon, so that Somaoro allowed himself be charmed by the music, and suddenly calm returned to the scene. Then the sorceror king asked him “Tell me, who are you and where do you come from?”, and the griot answered “I am Balla Fassèké son of Gnakoumandoua, and I come from the realm of Soundjata Keita”. The sorceror king looked at him while nodding his head, and finally he decided to retain him in his royal palace in order to name him as his personal griot (djeli).  It was at this very moment that he also decided to offer him the balafon and says to him: “Koyantè”, which means “The Pact”. From that day, a pact was sealed between the two men, hence the name “Koyantè” which later became Kouyaté, and since that day the ancestor of the Kouyatés was known as Balla Fassèké Kouyaté and the Kouyaté emblem is the eagle.

Love this ❤️ Wales based Artist N'famady Kouyate , takes us into is journey that is mind tingling and heart warming.