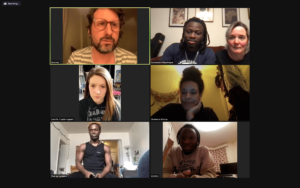 This project brought together two West African arts companies, The Successors of the Mandingue (Cardiff, Wales) and Productions Sagatallas (Quebec, Canada) by securing funding as part of the New Conversations programme for a new Wales/Canada music and dance collaboration project ‘Mandingue Horizons – Cymraeg/Québécois’ in February 2021.

The aim was to fuse traditional and contemporary by bringing together diverse cultures within countries and across continents to develop a new artistic piece exploring dualities in unity including bilingualism and biculturalism, whilst simultaneously building networks of support.

The initiating idea of the project was that it would explore the experience of the West African diaspora in two bilingual countries (French/English in Canada, and Welsh/English in Wales).  Pairs and duality would be explored as a theme in both the music composed especially for this project (with French and Welsh lyrics), and in pairing the traditional West African and Western contemporary dance styles of the artists.

The commissioned piece was written and recorded by Successors’ Artistic Director N’famady Kouyaté.   N’famady featured on the track playing traditional West African instruments including balafon, bolon, djembe as well as guitar and vocals in addition to Welsh guest musicians Joel Beswick on keys & Marc Elton on viola, with lyrics and spoken word by Cathryn Haulwen McShane-Kouyaté.  Here are the original lyrics in Welsh with an English translation underneath.

Coming together without touching

Hands across the sea

Creating from the history

Forms of the ages

The French lyrics played around with phrases from the Welsh original, and are sung throughout the composition. 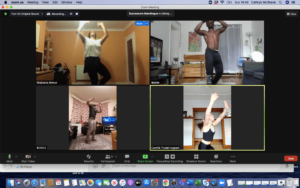 Two pairs of dancers on separate continents were then to be tasked with choreographing together using the same musical piece but on opposite sides of the Atlantic and then to come together online to form ‘a pair of pairs’ to choreograph together – in a form where similarities and differences could be explored –exploiting the possibilities presented by technology as well as the limitations of a 2D medium.

The dancers involved in the final production were:

When the song recording was completed it was presented to the dancers and was eagerly received.

The dancers then had an opportunity to reflect individually on their responses to the work before meeting in pairs online the following week to start exploring their contrasting dance traditions.  The following week and for the remainder of the project, the dancers came together twice weekly to work as a team overcoming challenges of five-hour time differences, work schedules, technology problems, and distance to come together in the virtual space using the music as a catalyst and their inspiration to explore their contrasting dance traditions.  Each learned styles of movement from each other they had not encountered or tried before and they experimented with bringing these elements together.

Interestingly both African dancers were determined to precisely learn the contemporary dance choreography despite pleas “to make it their own” (Shakeera Ahmun).  Different understandings of the music and representations were also explored: “The movement says something, you know, it’s not just dancing, but the movement has to say something….[regarding the lyrics] our body have to say something there.” (Oumar Almamy Camara)

The languages of French and Welsh were explored lyrically, while communication between the four dancers was primarily in English and Susu as the two most commonly shared between the artists. Language barriers were bridged through movement, repetition, and translation.  Dance vocabularies were shared and explored, with the rich physical languages of different traditions brought together to create new understandings between artists.

The project also aimed to achieve a collaboration that would combine ancient and modern with practitioners versed in their respective arts and disciplines using modern means of capturing and sharing ideas via Zoom and filming using mobile phones. The work would use these dualities to create something non-binary, a unity that facilitated by a single composition (musical and dance).

A real feeling of team and teamwork emerged as the project progressed, especially in the last week of the choreography work leading to the filming.  There was so much energy from being finally able to work again despite the limits of remote working.

“It almost felt that we were together in the same room.  Everyone was really together….intense effort.” (Cathryn McShane-Kouyaté)

Support from the wider team was appreciated and played an important role.  Everyone pulled together with an openness to learning and sharing that made borders disappear.  Challenges posed by the limitations of distance, physical space, time lag, broadband speeds and wifi-connections were overcome in creative ways (sharing videos on WhatsApp, repetitions, relaying/translating dance movements that couldn’t be seen due to frozen screens), with flexibility and patience so that the people, words, movements, and music were brought together. Every Zoom session was recorded and could be used as a resource.  While differences in musical and movement vocabularies were facilitated and mutual understanding developed.

It was originally envisaged that elements of the work would be performed as a livestream, while the work as a whole – including clips of the process and commentary would be professionally edited together to create a short film for online distribution and dissemination. The final project presentation would also have a BSL version for distribution via The Successors of the Mandingue website (which is available here on these pages). 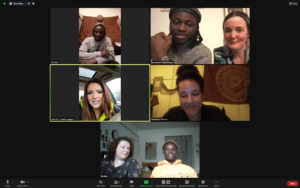 We successfully delivered an online project sharing event On March 28th 2021 comprising the first showings of two films created by our filmmaker Dominic Fitzgerald.  The first was the initial draft of the choreography film, and the second a ‘making-of’ film giving some insights into the creative process behind the scenes.  The event opened with all the project partners present introducing the project via a livestream Zoom to Facebook, followed by the films being premiered on three platforms – Facebook, YouTube and Instagram.  Viewers were able to watch, comment, and ask questions while project participants were online to respond.`. Facebook was selected as the primary platform for showcasing the work due to its reach in both Canada and the UK, and its popularity and accessibility in West Africa.

The final edited film of the creative work is now available to watch here.

In addition here is the original ‘Making of…’ film that highlights some of the more human elements of the project including the blurring of domestic boundaries when working from home (socks drying on a radiator, rearranging furniture, children playing playstation on the sofa non-plussed while Boblée does a standing somersault, baby-bombing and dancing), plus the ups and downs of technology.  The film also captures the joy of the work and its creative process.  By recording every session we have a great resource with invaluable insights to draw upon.

This collaborative project aimed to bring together two arts companies that reach out and support artists by bringing people together to create and perform. The project wanted to extend that reach and to enable the sharing of diverse expertise and experience, creating an environment of mutual support between the companies in both countries, plus individual practitioners among the African diaspora and natives of their new countries. 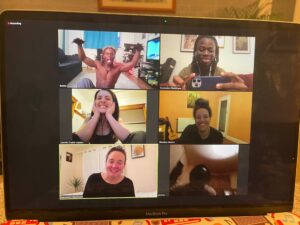 In the event all participants were grateful and happy to have the opportunity to learn and perform from this unique opportunity to work together at a distance at a time when a lot of artists are struggling to present creative work.  By the last session the group had made strong connections and lasting relationships had been forged, and there was a strong desire to continue working together in the future.

Here are some quotes from project participants:

“God chose us from different places to work together to create something. I feel really blessed…” (Boblée)

“Man don’t have one place – anywhere you are is your place….anywhere you travel is your place.  Your life decide that, that moment you are there now.  You don’t know if you will go back or not.  But when you are there your life is there.  You have to adapt.  To know their culture and for them to know your culture….” (Oumar Almamy Camara)

“I loved the challenge – keeps me alive and awake!” (Camille Trudel-Vigeant)

“It’s been lovely to watch…how it’s developed, it’s really worked.  Despite it being really hard, it’s working…. I thought it would be more about process and networking but the output is amazing” [despite the restraints of time, resources, distance, and technology] (Cathryn McShane-Kouyaté)

“..It’s about being you, authentically you.  It’s about being proud of who you are and what you represent.  And having the opportunity to express that is a gift in itself.” (Shakeera Ahmun)

In terms of next steps, we hope in the future to be able to come together in ‘real life’ to perform the work, but in the meantime we have had an offer from Beyond The Border International Storytelling Festival to show the project film as part of their Wales/Canada showcase work in July 2021.

“I know when we come together one day, we never know, that’s just a dream.  If that happens, working together, it’s going to be something great – more than this.” (Oumar Almamy Camara)

* New Conversations is a programme funded and delivered by the British Council Canada , Canada Council for the Arts, Farnham Maltings , and the High Commission of Canada in the United Kingdom.

Thanks also go to Safyan Iqbal for putting together the art work for us.